It had been weeks since we had gone on a panga outing in Banderas Bay and weeks since we had seen any rain.   The day was clear and blue and an escape from the heat.  Daily temperatures hovering just under 90 degrees with 70% humidity.

Although we motored out towards the Marietas for an hour, our only encounters with wildlife were two Olive Ridley turtles.  Tumbling down to the gorgeous coastline,  the shadowy foothills of the Sierra Madres show large patches of brown for lack of rain.  June is normally the beginning of the rainy season.  On Wednesday afternoon, there were a couple of rumbles of thunder, a blink of lightning and a very light rainfall. 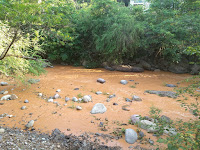 Late Thursday night, another brief rain, but enough of it for rivers to carry soil and sediment (and ranch manure) from the foothills into the bay.   When this
happens, there is a large brown smear on the
water at the mouth of the rivers.  Not a good time to swim at those locations.


After most of these bay excursions, we purchase fresh ceviche and slices of homemade coconut pie at a small stand near the entrance to the beach.  Next to it is a simple, small open-air restaurant where one can enjoy delicious, freshly caught fish.  The restaurants with umbrellas on the sand aren´t frequented much by locals and have fancier prices. 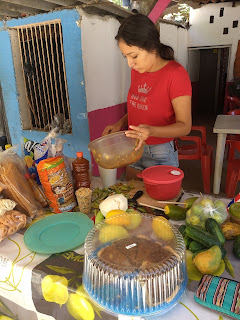 Tens of thousands of animal species are at risk for extinction.  The photographs of dead whales filled with plastic and starving polar bears sitting on small chunks of ice are heartbreaking.  The dichotomy in Mexico and many other countries is extreme overpopulation of cats and dogs.  Preventing these births reduces their suffering and the decimation of wildlife.

COLONIA INFONAVIT:  Very easy to get to - a straight drive north until just before reaching the municipality of Pitillal, and then a turn right at Macro Plaza.  Total driving time - about 20 minutes from centro.  We have visited this quiet, paved and cobbled colonia a few times.  The clinic always takes place in the empty white and orange police station across from a dusty sports field.  The officer on duty didn´t want his picture taken.
Sterilizations at PEACEAnimals clinics are occasionally done for other animals besides cats and dogs.  Recently the vets sterilized a couple of guinea pigs, and occasionally pet rabbits, possoms and raccoons are brought to the clinics.  All these animals are required to be male.


EDUCATION PROGRAM:  On hold until schools back in session. 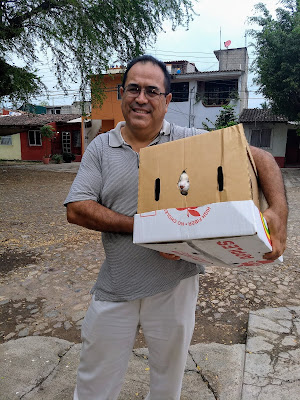 TOTAL: 155!  PLUS pregnancies terminated for 1 dog with 3 fetuses and 1 cat with 4 fetuses.

The Infonavit and el Porvenir clinics was underwritten by the anonymous and generous donation of $10,000 USD, which pays for 5.56 PEACEAnimals clinics. These were the fourth and fifth.

EL PORVENIR,  a small town in the neighboring state of Nayarit, is a 45 minute drive northeast of centro Vallarta.
The land is mostly scrub and the homes are very simple ones, mostly one-story cement or cinder block.  The clinic took place in the large patio of a two-story, terra cotta colored house.   I arrived at 8:30 on Wednesday morning, our first clinic day, and was told by a volunteer that some pet owners had arrived as early as 5:30 AM.

One pet owner had brought in three pretty tan and white female puppies and their mama.  He planned to bring the three male puppies the next morning.  A friendly, skinny brown Pit Bull- mix lingered in front of the clinic.  His back was bloody from mange and because no one at the clinic was from el Porvenir, there was no help for him.  He would have needed a month of shots for the mange, and if only just neutered, would have been in a "half-drunken" state for several hours after anesthesia and unable to defend himself from vehicles and other dogs. This sweet dog, if not rescued, is doomed.  We always see homeless street dogs and it´s always sad.  The homeless cats number in the thousands and they are seen mostly at night, when they´re searching for food at garbage pick-up locations.

Although June is the beginning of the rainy season, there have been only been drips and drizzles of rain. For weeks, with the exception of a couple of days of partial sun, dove-colored clouds hover over Vallarta and Banderas Bay.
On a grey Sunday, we load up our dogs, drive to Boca and take a panga to a small village a few miles south.  We´re surprised to find  part of the cement walkway from the pier destroyed by storms.  Three small, barefooted children laugh and point to a primitive detour up the side of the hill.
We laugh too as we clamber up a dirt trail, occasionally holding on to a rope, and then edge down to the walkway. 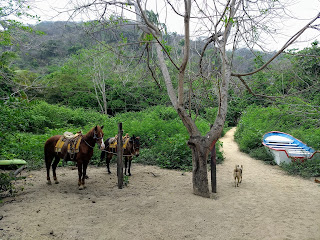 The cement path through the village is dotted with chickens, roosters and a few dogs before crossing over to a coco palm-lined dirt path leading to the river and beach. 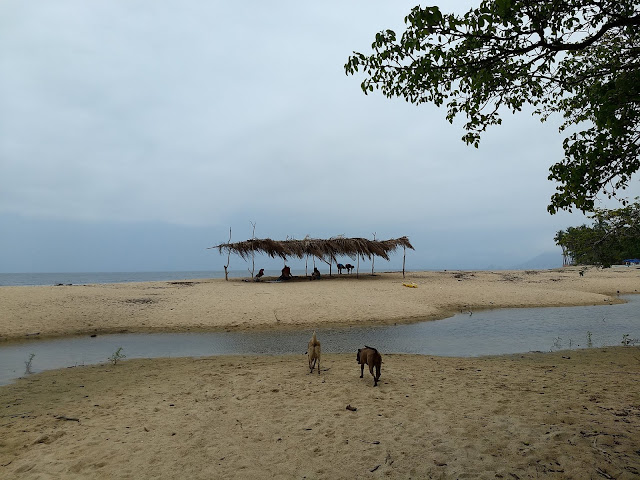 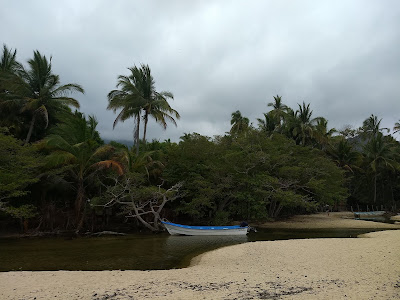 Due to the absence of rain, the water level is only slightly above the ankles. We quickly cross the river and walk the long stretch of soft, sandy, mostly empty beach for a swim and seafood lunch under thatched palms. A perfect day. 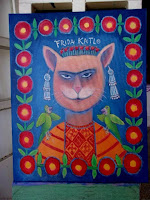 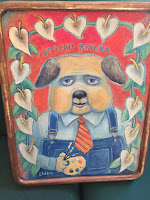 "Dogogo Rivera," a painting by Lee Chapman of a dog holding an easel and brushes, was donated to the PEACEAnimals online auction in December.  High bidders were board members, Norma Kafer and her husband James Gordon. They liked the painting so much that they commissioned Lee, popular local artist and animal lover/rescuer, to paint a cat companion.  "Frida Katlo" soon arrived at their home in Arizona.

NEW BOARD MEMBER:  Clare Leach, half-time resident of Puerto Vallarta, has been enthusiastically welcomed by the board of directors of PEACEAnimals.  Clare, a mostly retired licensed professional counselor, is passionate about spay/neuter and has already been very busy and successful in raising funds for our clinics.
http://peaceanimals.org/about/board_of_directors


MAGISTERIO: A dusty colonia about 25 minutes northeast of centro Vallarta.  The clinic took place in a very spacious, open-air "salon de eventos."
I bring 20 donated collars and 20 donated leashes the first day of all clinics until supplies depleted.  For many pet owners, these are luxuries they cannot afford, and they are grateful.

STERILIZATIONS AT CLINIC AT MAGISTERIO:


The Magisterio clinic was underwritten by an anonymous, generous donation of $10,000 USD, which pays for 5.56 PEACEAnimals clinics.  This is the third.

DONATIONS at clinic in
Magisterio:  890 pesos

Volcanes -  Inland, dusty and rural, this is one of the poorest colonias in Puerto Vallarta. It is also the colonia with one of the best public schools in town. The Volcanes school offers the excellent Volcanes Community Education Project. www.volcanesproject.com; www.facebook.com/volcanescommunityproject

Megan Gallagher, English coordinator for four years at the Volcanes school, didn´t forget this community after returning to California.  Currently the lead teacher for grades 5 and 6 at the Spring Hill school in Petaluma, Megan is also the middle school Spanish teacher and the Spanish 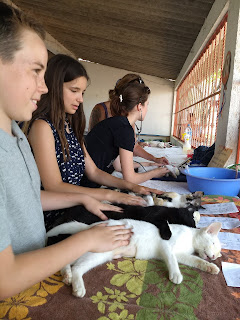 and Global Connections coordinator.  She arrived in Puerto Vallarta on June 10th with eight students who have been Skyping back and forth in English and Spanish with Volcanes students.  It was the second visit for six of them. In addition to cleaning surgical instruments, they especially enjoyed the petting and rubbing of cats and kittens on the recovery table.

I arrived at 9 with a small kitten and puppy belonging to two neighbors.  The sun was finally out and it was hot.  The clinic in the one-story white cement "Casa de Adulto Mayor" (senior citizen house) was full at 60 animals and we had run out of kennels.  Some people had arrived as early as 7 AM to register their animals and waited patiently until 8:30 to sign registration forms.  Pet owners who arrived after 8:30 were asked to come back the following day.

I walked down the dirt road to a small market to buy lunch meat and kibble for three extremely skinny dogs whose  owner had brought them to be spayed and neutered. The woman´s third dog couldn´t be spayed because she had given birth to three puppies a week before. The dogs ate ravenously.  In a place of poverty, it feels somehow misguided to be giving food to animals and not to their owners, who can´t afford to feed pets.


Following are donations earmarked for Volcanes clinic, thanks to Megan Gallagher, organizer: