LAGUNA DE BACALAR.    If this were a lake, it would be the second largest one in México.  But what is called the "Lake of Seven Colors" is a lagoon in the Yucatan that is connected to the Caribbean.

After flying to Chetumal, the visually unappealing capital of the state of Quintano Roo, we rent a car and begin the 38.5 kilometer drive to Laguna de Bacalar.  Two kilometers before arriving, we stop to look at the crystal clear Cenote Azul.  At 300 meters across, it is the widest cenote in Mexico, with a depth of 150 meters.  There is a rope stretching across the water in the event one
wants to hang onto something.  The only way to the cenote is to pay an entrance fee and walk down flights of cement stairs to a very large and uninviting restaurant. It was noisy and there were plenty of people in the water, so after a close-up look, we leave without taking a swim.

BACALAR - (Mayan - b´ak halal - "surrounded by reeds") Part of the Mayan civilization in pre-Columbia times, it was seized by the Spanish in 1543. Continually raided for its precious wood by Caribbean and European pirates,  Bacalar was sacked by pirates in the 17th century.  A stone fortress with cannons was completed in 1729.  The perfectly preserved fort still perches above the lagoon and houses a small and quite good museum.  During the Yucatan Caste War of 1848, Bacalar was conquered by the Cahn Santa Cruz Maya rebels,  who were able to hold it until 1902. 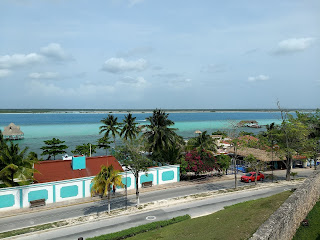 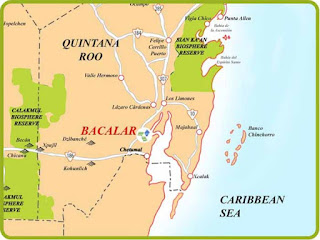 THE LAGOON:  Breathtakingly beautiful.  Absolutely gorgeous.   Powdery, white sand gives complete clarity to the water, which changes colors dramatically in almost in evenly defined lines of several brilliant tones of turquoise and blue.  At its longest point, the
the lagoon is 42 kilometers and at its widest,
2 kilometers.  Complete surface measurement is 42 square kilometers.  The water in the lagoon is fed by underground cenotes and the water is warm - probably 78-80 degrees.  We swam, kayaked and boated for five days at all hours at different areas of the lagoon.
Favorites:   "Sac-Ha" - at a narrow point of the lagoon on a sandy strip of land facing dense palm groves on the opposite side.  A line of palapas for shade and no one there.  The sign near the mangroves advises to keep off the astramolites, a word I can´t remember hearing before.
These are rock-like, living structures formed by bacteria and usually found in shallow waters. For two billion years, stromatolites pumped oxygen in the ocean, which is why we are all alive.

"Los Rápidos" ("the rapids") - These are not actually rapids, but a narrow part of the lagoon where water seems like a river, moving fairly quickly and strongly in one direction.  Fun for swimming and kayaking.

In a boat - swimming in the Cenote Negro, which is one of two cenotes inside the lagoon.

In shallow areas, one throws an anchor and walks waist-high in sand that squishes pleasantly between one´s toes.  Scooping up handfuls of it and smearing it over face and body is a great exfoliation treatment.  There are at least two small islands in the lagoon and "pirate alley"  is the winding, very narrow part of the lagoon that connects to the Caribbean.  If there were a straight line drawn, the sea is only 40 kilometers away.

When not in or on the water, we are reading in swaying hammocks, hearing the summer hum of small, unseen insects (no mosquitos!) and the calls of approximately two dozen different species of birds.  After five heavenly days, we head off in our rental car for XPUJIL in the biosphere/archaeological zone of Campeche.

SAN JUAN, NAYARIT:  We revisit this location about an hour´s drive away in the next state because the need is always great and because the very energetic Linda Stewart does a terrific job raising the extra money for an out-of-town clinic and of organizing locations, lunches and volunteers.

This clinic was made possible by a generous and anonymous donation of $10,000 for PEACEAnimals clinics.  This will pay the costs of 5.56 clinics.


I was traveling and unable to attend this clinic.  All Photos were taken by our star volunteer, Frank Ohly.

DONATIONS TO
PEACEANIMALS:  None
these past two weeks.

Posted by Gretchen at 5:05 PM No comments:

BULLS ON THE MALECÓN 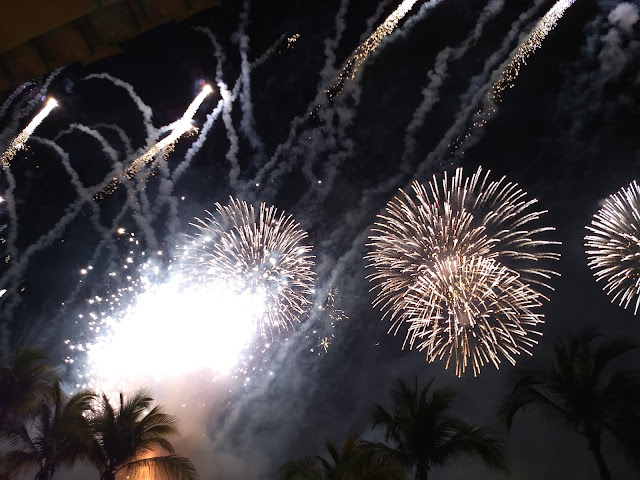 BULLS ON THE MALECÓN- Eight life size, aluminum and paper-covered bulls announced the arrival of the 17th International Symposium of Fireworks May 6-10.  The last one held in Vallarta was ten years ago, when towers were built at the stadium for launching the extraordinary "luces artificiales."

My favorite bull was the glittering one with no bandarillas piercing
its body.  Bullfighting is not a sport.  The costumes,  music and pageantry are wonderful, but this  "competition" is not a fair one and is extreme cruelty to animals. 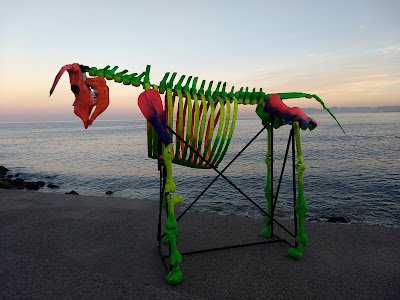 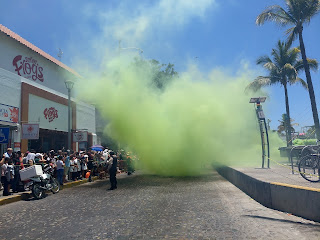 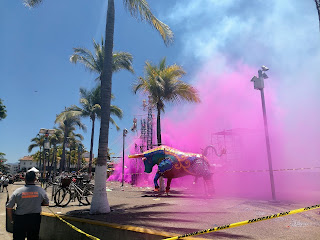 Wednesday, May 8th at 2 pm was the only daylight display of fireworks.  Low towers built next to the bulls were used to set off very loud bangs and hisses of oversize firecrackers on spinning wheels of different sizes.  Onlookers were enveloped in clouds of rainbow-colored sulphur in the closed-off street next to the malecón.

All other firework displays were set off at about 9:30 at night from three very high, temporary towers on the malecón and several tethered barges in the bay facing the malecón.  The shows lasted approximately thirty minutes each night and were spectacularly beautiful.  Accompanied by booms, squeals, crackles,  sizzles and fizzles,  the sky dazzled and glittered with otherworldly meteors, comets, asteroids, falling stars and shooting stars.  Above this brilliant display was a slender white crescent moon surrounded by unseen stars.

Alas, fireworks are pollutants, leaving behind smoke, metal particles, and harmful chemicals  and toxins, some of which never decompose or disintegrate.  In Sydney, Australia, fireworks are 100% carbon neutral, and in parts of Europe, there are "quiet" fireworks, to prevent livestock and pets from being terrorized.


MEZCALES - Driving north 40 minutes on highway 200 and before reaching the upscale beach town of Bucerias, is the small, inland town of Mezcales in the state of nearby Nayarit.   The clinic took place in a small, unoccupied one-story cement house across the street from the very tall and imposing Pentecostal Iglesia de la Luz del Mundo.  There is a matching one in Puerto Vallarta off the libramiento, aka tunnel road.  Both are very visible landmarks in the area of Banderas Bay.

As in most Mexican towns and neighborhoods, there is poverty in Mezcales.  A colorfully dressed woman wearing a pink bandana and pink athletic shoes brought in her two medium-size dogs.  The female, whose long, withered teats were evidence of litters of puppies,  was in heat.  When I asked the owner how many litters the dog had had, she shook her head,  threw her arms up in the air and exclaimed "at least five."  I watched the two dogs follow her home to the tin shack next to the freeway.


STERILIZATIONS AT CLINIC- MEZCALES, NAYARIT-
MAY 8-11:

67% (77 cats and dogs) of the clinic in Mezcales was made possible by the generous matching gift of $3,000 USD made in December by Juanito Osuna.  Combined with 128 animals sterilized in Pitillal the week before, Juanito´s donation resulted in the sterilization of 174 cats and dogs.

DONATIONS AT CLINIC IN MEZCALES:  1,120 pesos

DONATIONS TO PEACEANIMALS:  None recorded this past week.  Amy Welch, treasurer, is on an extended vacation with very little access to internet.

Posted by Gretchen at 2:42 PM No comments: