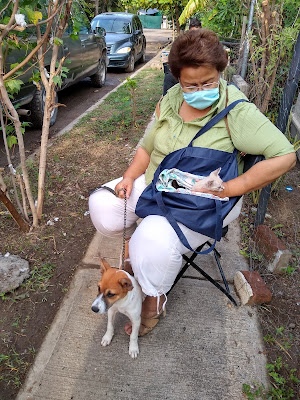 SANTA FE, NAYARIT is 18 km. northeast of Vallarta, a 45-minute drive.  Turning east at Mezcales, the first saintly town in the municipality of the Valle de Banderas is San Clemente, followed by el Porvenir ("future"), San Vicente,  San Jose, Santa Fe and finally San Juan.  This was our first visit to Santa Fe.

Thank you to Janina Erban, owner
of Paraiso Felino (cat shelter with 320 kitties) in San Juan, for
securing location and volunteers and paying the extra gasoline and driving time costs for a clinic outside Vallarta. The clinic took place in an empty, very small cement house in a modest residential area.


The dogs exist to guard the junkyard.  Puppies will be born on gravel or mud. Those that survive will be given away unsterilized, ultimately adding to hundreds of homeless dogs born to suffer.

Postscript:  Claudia Gallegos,  generous dog rescuer, made a trip to the junkyard, advising owner she would take the pregnant Pittie home with her, find homes for pups at 8 weeks and return the mother.  The man´s reply was that none of the dogs were pregnant and he didn´t need any help. 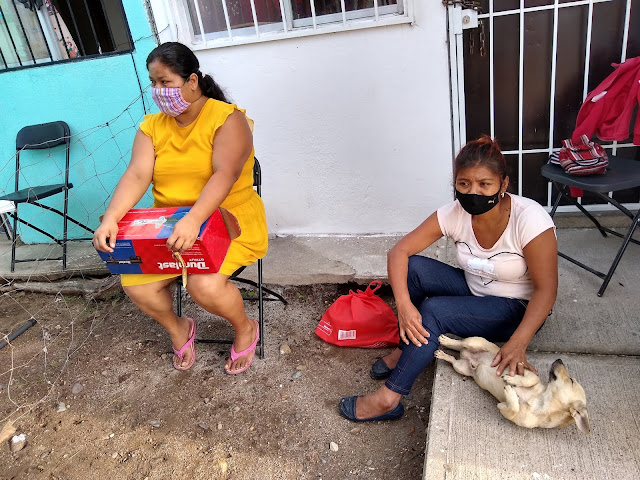 EL PORVENIR, NAYARIT At Mezcales,  the second small town to the east, 16 km. from Vallarta. Porvenir,  which means "future," is followed by all "saint" towns.
The clinic took place in an airy, long rectangular cement bodega.  A block away at the immaculate and tree-filled plaza, three happy male dogs rollicked and rolled in the lawn´s muddy puddles.  Hot, humid days are broken by occasional evening thunderstorms.

COVID-19 UPDATE: Mexicans are very sociable. We are missing the embraces and kisses on the cheek.

Shop owners required to wear masks.  Not to comply can result in a 5,000 peso fine.  Hospital occupancy currently at 27%. If at 50%, Vallarta goes into 14-day lockdown.  W Hotel at the long, powdery white sandy beach at Destiladeras beach in Nayarit is open.  Pool open.  Beach closed. All beaches in Nayarit, with the inexplicable exception of Sayulita, are closed.  A pity, as there is so much space and never necessary to cluster.  Vallarta beaches and those to the south open.

WHITE KITTEN:  Loud kitten meows from our patio.  A tiny white kitten, not more than a couple of days old, was crawling very slowly and blindly across the tiles. Two stressful hours later I had found an experienced foster home with Suzanna Persa, who named him "Angelito." She thinks he is male.
Keeping it alive meant bottle feeding the little kitten every three hours.  Suzanna was also bottle feeding three other older kittens every four hours.  After being neutered, Angelito will be for adoption in a couple of months.  The kitten´s arrival at our home remains a mystery.

BROWN PUPPY:  As quickly as its little legs would go, the tiny brown puppy was trotting down the dusty road in Paso Guayabitos. Stopped the car, picked it up and drove home.  She had sweet puppy breath and was full of worms.  The vet said she was not more than five weeks old.  I called her "Petunia."  She spent a week with us before A Dogs New Life shelter found a foster home for Petunia in Bucerias.  After a very short stay, the adorable puppy was adopted.  www.adogsnewlife.org


:JAGUARS:  Two beautiful jaguars were found poisoned high up in the hills above Puerto Vallarta in Sierra de Vallejo, where there are large cattle ranches.  One of the suspected killers posted a photo of himself holding the head of a jaguar, sparking outrage and an investigation that bore no results.
Neither Jalisco nor Nayarit have state programs to support ranchers who live amongst predators. However, the National Confederation of Livestock Organizations has a fund that provides insurance covering all reported, verifiable losses. It´s a nationwide compensation payment to which all cattle ranchers are entitled. Educating ranchers is critical to the survival of the endangered Mexican jaguar. For more information and how to help:   www.alianzajaguar.org

PLAYA GRANDE:  To escape from a multitude of masks,  we take our dogs to Playa Grande, a 25-minute drive from centro.  The small village, only reachable by a dirt road, had been closed to outsiders for two months. Behind the village are more than 2,000 hectares of ejido land.  No fishing or hunting allowed.

Playa Grande is not a "big beach." The río Cuale runs through the canyon, and on its banks are a few small, sandy beaches.  The river is bordered on both sides by pink cantera and grey granite cliffs covered in dense, emerald green jungle. There is a great gash on one of the cantera hills from strip mining, which gives the community a source of income.

Posted by GRETCHEN DEWITT at 4:44 PM No comments:

VILLA DE GUADALUPE:  Setting out for a clinic location that one has never been to, or even heard of, is often an adventure.  One can get lost.  Many corners have no street signs.  Street numbers often do not go in sequence. GPS does not work everywhere. Roads can be very dusty, pockmarked, rutted and flooded. Unmarked speed bumps, and there are many, can be startling... or amusing.
Using the "Waze" app, the drive northeast to colonia Villa de Guadalupe took twenty-five minutes.  Although it was our first visit to this neighborhood, it´s very close to the municipality of Pitillal and the colonia of Coapinole. A brief morning downpour had muddied many of the dirt roads.

Surgeries took place in the front cement and brick patio of a home belonging to the family of a young woman named Cristina, who had contacted us.  As with other neighborhoods in many cities and towns in Mexico, there was visible poverty in Villa de Guadalupe.


Recent days had been hot, with high humidity and temperatures hovering at about 90 degrees.  Five cats brought to the clinic in a bird cage were soon panting,  so placed in front of a fan and operated on right away.

MOJONERAS is a dusty, inland colonia northeast of the airport and the main bus terminal. The clinics have taken place there once or twice a year, and always at the airy, cement local government building a couple of blocks from the treeless, grassless and plantless main plaza.
Animals that have been previously spayed and neutered are always treated without cost for fleas, ticks and parasites. One man said that he didn´t know if his large male dog had been sterilized. A quick look confirmed that it had been,  so the dog was treated for free and his owner given a two-cup bag of kibble and a PEACEAnimals lasso-style leash.

Clinic in Mojoneras underwritten by
The Mahoney Foundation. 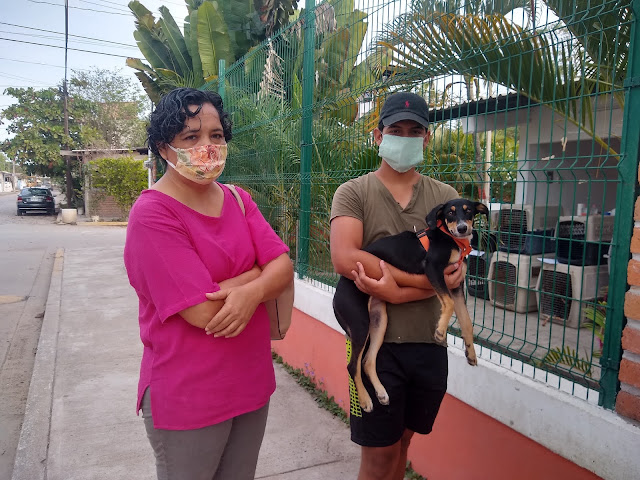 ADDITION TO REPORT FOR LAS ARALIAS:  The clinic in las Aralias June 17-20 was partially underwritten (11% = 17 animals) by the generous grant of $11,000 US from FOHA (Friends of Homeless Animals).  Roie Griego, founder and president of FOHA, is a board member of PEACEAnimals.  TOTAL sterilizations resulting from this grant: 997.

ECOCIDE is what protestors on both sides of the Pitillal river were calling the bulldozing and uprooting of dozens of trees beginning at the Fluvial bridge. The action was intended to prevent flooding of nearby neighboods where the ground is less able to absorb water, the result of development.  This project, which took place in two days time while locals were "sheltering in," caused the death of many birds, turtles and other small animals living in the river or on its banks. 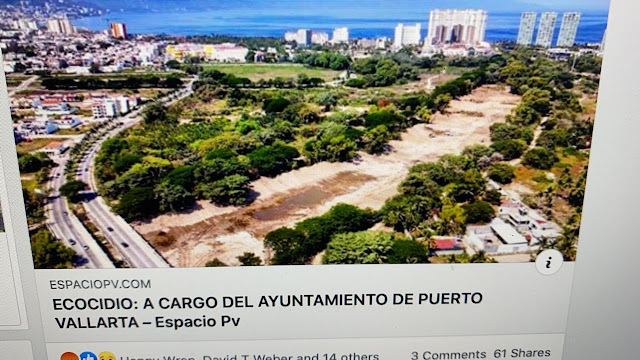 The Pitillal river, springing from high up in the Sierra Madres, meanders down to Puerto Vallarta, emptying into Banderas Bay.  With the removal of earth and trees, and by destroying  curves of the river that act as brakes,  the Pitillal will now move at a gallop, allowing little time for water to seep into the soil.  Excess sediment carried by the river into the forty-mile, horseshoe-shaped bay will cloud its beauty and potentially harm the fish.

If, as a resident or tourist,  you have suggestions or questions regarding Puerto Vallarta, please contact: Office of the Mayor:  presidencia.municipal@puertovallarta.gob.mx and/or Office of Tourism:  turismomunicipalpv@gmail.com 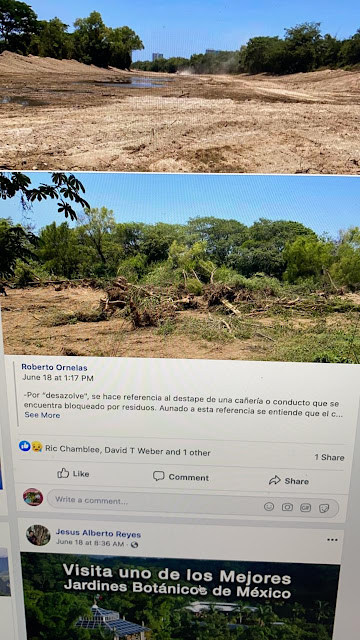 Hotels now at 27% occupancy, up from 0%.  Streets and sidewalks  no longer empty. Beaches not crowded. Some gyms and churches allowed to reopen at reduced numbers, with masks required.  The library, which also serves as a community center, has reopened. Nightly displays of fireworks from the "pirate" ship in Puerto Vallarta have started up again, and seem almost celebratory.

In the nearby state of Nayarit, the Four Seasons and the St. Regis hotels have reopened in Punta de Mita. Only registered guests allowed in. Occupancy rate is 30%.  Beaches closed but hotel pools open. Restaurants and shops open, golf courses open.  Fifteen minutes away in Sayulita, shops, restaurants and beach open, but very few people on it.  Other than for waiters, no masks in sight.

Boca de Tomatlán, a small fishing village 30 minutes south of Vallarta, has only one entrance for vehicles.  It was closed for ten weeks with guards stationed 24/7. People attempting to enter were told to "go back home."  The cement malecón (promenade) in Boca, next to the río Horcones, was constructed three years ago as a gentrification gesture.  It is already beginning to break apart.  Piers south of Boca belonging to the villages of las Ánimas and Quimixto were available only to residents for transporation and for deliveries of food and necessary supplies.  All three piers have reopened and water taxis allowed to operate at 50% of passenger capacity.  No cases of coronavirus to date and no masks on display in Boca.

Soon after Boca reopened, I joined a panga exploration with Karla de la Peña, animal/environmental activist and owner of Boca Divers. The water in the bay was 80 degrees and very transparent. Our legs looked filmy Mediterannean blue and mysterious underneath us as a pod of small, spotted dolphins swam nearby, blissfully unaware of the troubles of humans ashore.


Posted by GRETCHEN DEWITT at 2:51 PM No comments: