I didn´t know what to expect. Our last clinic before the two weeks of Semana Santa had take place at this same location, and the new government order for everyone to wear masks when outside had just been put in place. As I drove up to Sofi Gonzalez´s bodega,
there were just a couple of people in line at the front door. Then I looked across the street at the park, where a long line of masked people with pets was seated on the painted orange cement ledge.  There had already been turnaways.

Claudia Gallegos, who rescued the white German Shepherd mix and her eight puppies, was there with Luna and her four beautiful male puppies. They are for adoption.  The four females will be spayed
in another month and also for adoption.  Claudia lives on a large property in las Juntas and is a committed animal rescuer of chickens, roosters, cats and dogs.   She currently has 20 kittens and cats for adoption plus 1 Pit Bull and 1 Belgian Shepherd.  Scroll for photos.  If interested, contact:  gallegosclaudia@prodigy.net.mx 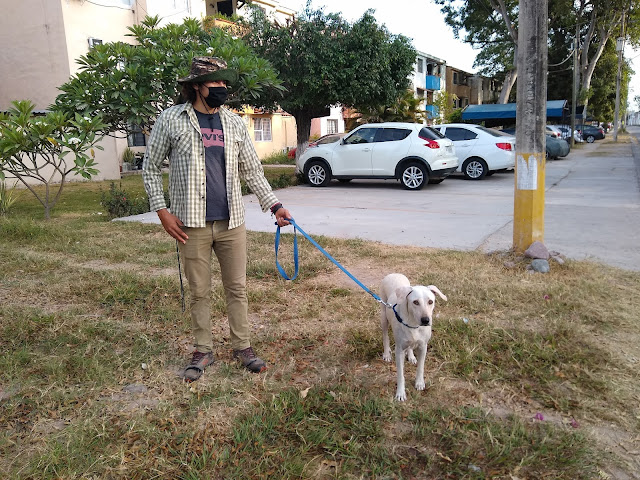 On April 23rd,  the second day of the clinic, local government officials arrived before the vet team.  What they observed were pet owners, some who had arrived as early as 6 AM, seated closely together on the cement borders of the park. We have no volunteers now, so no one was there to supervise the distancing. The result of the pet owners´failure to observe the new regulations of social distancing was the government´s cancellation of clinics until further notice. Clinics are considered "essential services"under the stage three coronavirus regulations.  Alas.

Clare Leach (board member) - $50 US
monthly for pet food at our clinics.

As previously noted, monies raised over and above the $200 US costs for
Nyssa´s emergency surgery would be allocated to our free mobile spay/neuter program.  This is not an easy time to think about helping a starving, sick dog in Mexico.  Thank you to the above individuals for your kindness and generosity.  We wish she had survived and lived a long and loving life.  Thank you to Liz Gómez for going to her rescue.

The large Olive Ridley turtle had made two trails from the bay to the beach where she had begun two sandy nests.  Her third trail  ended very close to the side walk,  directly in front of Coco Tropical restaurant,  and that is where she chose to lay her eggs. 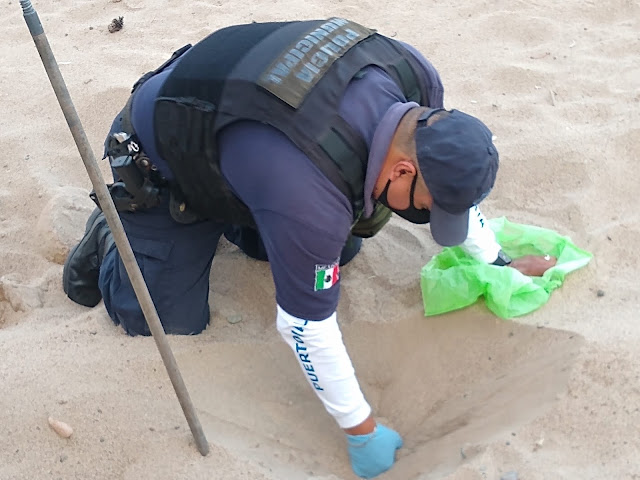 Passerbys alerted the tourist police because of the danger of dogs and humans digging up the eggs. Three arrived almost immediately. After the turtle had made her way slowly back to the bay, one of the policemen began to dig up and bag approximately 100 eggs for transport to a safe beach corral. He commented that "people are hungry now and the eggs are delicious."
The dogs and I walked home from the south end of the beach via the isla cuale, which is the very small, arrow shaped island where the río cuale divides the old part of town.  The river is running low and slow and clean now.  The island is where the cultural center is, where so many cats are abandoned,  and where couples exchange kisses under the shade of mango and ficus trees.

Posted by GRETCHEN DEWITT at 9:44 AM No comments:

Food banks established for people in need,  and some feeding locations and deliveries for cats and dogs available, i.e., Sandee´s Project and Dog for Life.  Many dogs being abandoned because pet owners can´t afford to feed them. PETCO advises us when they have about-to-expire dog food available at generously reduced prices so we can distribute small bags of kibble at our free s/n clinics.


A photo of a starving homeless dog completely covered in mange was posted on FB.  I re-posted and received two offers of help.  Henriette Hummel went to feed  her and Liz Gómez went to fetch her and  named the dog "Nyssa" (Greek for "beginning").  At a Pitillal vet´s office, various blood tests were done.  She was diagnosed with ehrlichia and prescribed one pill a day for 30 days.  Although the vet told Liz that Nyssa was a Xolo
(Mexican Hairless), a visit to a second vet confirmed the emaciated dog had demodetic mange. X-rays showed an old fracture in her right rear leg, which prevented her from walking on all fours. Surgery after the dog got healthy was a possibility.  A subsequent x-ray  on April 13th revealed a diaphragmatic hernia, requiring immediate surgery, which had high risk.  Liz chose surgery over euthanasia.  There were complications, including a lot of fluid around the dog´s heart and organs. Sadly, Nyssa did not survive surgery.  The vets were amazed that she had been able to live as long as she had.

A fund at PEACEAnimals has been set up for Nyssa´s vet expenses. Total charges including consultations, ehrlichia test, x-rays, blood work, antibiotics, anti-inflammatories, emergency care and surgery = 9,350 pesos less 4,000 pesos from an anonymous donor and a 700 peso donation from Maureen Minter.

To help Liz, who rescues many dogs and will continue rescuing: www.peaceanimals.org  Select PEACEAnimals as the charity under Banderas Bay Charities and then advise our treasurer, Amy Welch, of this donation -  amywelchpdx@comcast.net  Balance owing = 4,650 pesos (approx $200 US). Donations tax-deductible in the U.S.  If additional funds are raised over this amount, they will be donated to our free mobile spay/neuter clinics.  Our mission is to prevent the future suffering of animals.  A free spay/neuter program does the most good for the most animals.

On our last clinic day before the two-week Easter break, I followed Henriette Hummel and her friend Rodrigo up into hills
of loma bonita in Pitillal to the dusty empty lot where Nyssa had been rescued.  Adjacent to it were eight dogs, some emaciated, and all chained or tied up in front of two very humble homes. Money for cartons of Corona beer would have been better spent on pet  food.  A choice had been made.

After giving the families kibble, we loaded up five dogs and took them to the half-day clinic in las aralias.  Henriette returned four of the dogs to their owners and took the pretty two-month old female puppy home, because the owners didn´t want to keep her. Its two siblings from an emaciated mother had both died. A week later, the puppy was vaccinated and adopted.

It is spring and breezy and blue and in all its beauty, Puerto Vallarta doesn´t seem like the place that a pandemic would visit.  But the town is almost completely shuttered with very few cars on the roads. Beaches closed. Parks closed. Malecón closed. Three roads into town blocked.  All but three hotels closed - 39,000 rooms available and 29 rooms occupied.  COVID-19 is a deep wound for a tourist location in México, which has 65-70% poverty and 50% of its population working on the streets.  Wherever one is, this is a time to help others.
GARRABO - FASTEST RECORDED LIZARD IN THE WORLD - UP TO 21 MPH

DOGS AND CATS FOR ADOPTION AT THE CENTRO DE CONTROL ANIMAL Y SALUD (ACOPIO)   ALL ANIMALS TESTED FOR DISEASE, VACCINATED AND STERILIZED.  CLICK LINK FOR PHOTOS AND DESCRIPTIONS.
(322) 293-3690

Posted by GRETCHEN DEWITT at 8:36 PM No comments: